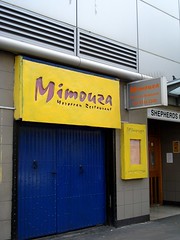 Mimouza was a Moroccan restaurant in Shepherd's Bush, part of the West 12 Shopping Centre but with an external frontage on Shepherd's Bush Green. According to Google Street View, by mid-2014 it had closed down and the premises were occupied by a branch of Subway.

Inside, it's quite atmospheric, with soft seating, rugs, tiled tables, and candles. They're unlicensed, but they allow you to bring your own alcohol in. Corkage is £3 (as of September 2008), and there's an off licence a couple of doors away. There are rumours of a belly-dancer at weekends.

When elvum and friends visited on a Wednesday night during Ramadan, the place was virtually deserted. The food was good quality, with plenty of vegetarian choices photo of the menu as of April 2009. The breads were freshly-baked, and excellent.

James visited with a couple of friends (including one vegan) in late April 2009. The service was atrocious, including waiting half an hour to tell me my choice of mains was unavailable as they were out of okra. I selected another, and five minutes later was told that was out as well. It took forever for our drinks to arrive (non-alcoholic cocktails, very nice), then even longer for the starters. Our mains were brought after seemingly forever and one of them was a completely different dish to what was ordered. They were all taken away and brought back ten minutes later. Two of the three in the second round of booze-free cocktails were on the house to make up for the error.

The food was very good, but after the service, we declined to stay and experience dessert. Unfortunately, as our two courses had taken around 2 and a half hours, the preferred local hostelry (The Stinging Nettle) was shut. It should be noted that we thought the place was practically empty, but there is a second room in the back which had a large party (and is presumably responsible for the poor service).

Highlights of the menu were the (usually vegan) soup of the day, the hummous (very tahini-y) and a lamb tagine with garlicky and onion sauce. The meats were all very succulent. My vegan friend managed to survive a meal and then say she enjoyed it.