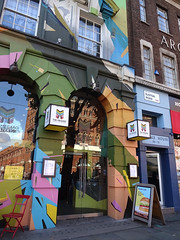 Hotel restaurant and bar just across the road from King's Cross/St Pancras. It has two entrances; one on Euston Road (pictured) and the other down a side street photo.

The eating area is on the ground floor, low-ceilinged and dimly lit. A bar runs along one wall near the front entrance, and there's a semi-open kitchen at the back. Decor is faux-unfinished; walls are painted to resemble partially-dried plasterwork, copper piping terminates in odd places along the ceiling, and the bar is covered with brightly-coloured shapes with a rather 80s feeling. Most of the seating is at generously-sized two-person or four-person tables, but there are also a couple of long, slabby communal tables.

Kake visited on a Tuesday morning in August 2019. There were a fair few people in when I arrived around 8:45am, presumably most of them guests at the hotel, but there were still a couple of tables free for non-residents. Music was playing quietly, only just audible over the sounds of conversation.

I chose from the "brioche buns" section of the breakfast menu, selecting the strapazzate: scrambled eggs, sour cream, chives, and Lincolnshire Poacher cheese (£7) photo. It was fine, though would have been better if it had arrived hot, on a larger plate, and deconstructed; it was far too messy to eat with my hands, and taking it apart to eat with a knife and fork meant that one bun half was completely plain and bare while the other was overloaded with toppings. I'd also have liked the brioche bun halves better toasted, to give some textural contrast other than soft-on-soft.

Earl Grey tea (£2.90) was loose leaf, and arrived in a cafetiere-style pot exactly the same size as the mug.

Service was friendly and efficient. A 12.5% service charge was added to the bill.

Child-friendliness: There were several children in during our visit. They have at least one highchair (the type with no tray and very little back support).

Accessibility: No steps at either entrance. There's step-free access to the hotel toilets on the first floor via a lift, but you may have to have a staff member go up there with you to make sure you can get through the keycarded door.