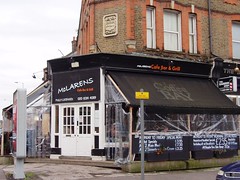 McLaren's was a small cafe in Honor Oak Park. According to Google Street View, it closed down some time between April 2015 and May 2016.

Service is efficient, though it's a fairly small space. There's a covered outdoor seating area as well.

Ewan visited in the morning of New Year's Eve 2007, and can especially recommend their breakfasts. There are four options (including vegetarian), all with scrambled eggs and sauteed potatoes. The vegetarian option has what appears to be a homemade mushroom and tarragon sausage, with plenty of the other staples (baked beans, mushrooms, grilled cherry tomatoes, egg and bread), and is very tasty.

On my visit, a breakfast special was also advertised before 11:45am on Mondays to Fridays, whereby any breakfast would be £2.95 (you can see this on the photo), though it wasn't operating on New Year's Eve.