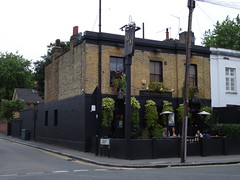 This Good Beer Guide pub closed in 2012, and reopened in December 2013 as a branch of the Craft Beer Co.

Pub in Clapham, up a side road from the main street.

It's quite small and dark inside. There's a patio out the front, and (according to the interweb) a garden out the back with a marquee.

Kake and Ben visited on a Wednesday afternoon in April 2009. There were a few other people in, probably locals/regulars. A TV was showing sport with the sound on. Service was friendly.

Two of the handpumps were off, but the others offered Hopback Summer Lightning (£3.20 for two halves), Ringwood Best, and Sharp's Doom Bar.

We sat out the front in the enclosed beer garden/patio, and debated over whether it actually counted as a beer garden or not. The final verdict was along the lines of "probably, yes, but only because it's on a quiet road rather than a noisy one".

According to the Pubs Galore comments linked below, as of August 2010 there's a quiz every other Thursday from 8pm.