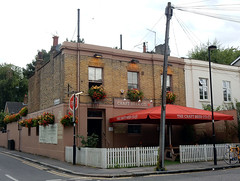 Craft Beer Co was a pub in Clapham, part of a small chain. It has now closed. As of late July 2017, Beer Guide London reports that it's due to be replaced by a new business called Clapham Tap.

It's a small space, wrapped around the bar, though it opens up somewhat to the left with a reasonable amount of standing room. To the right of the bar, padded pleather banquettes line the wall leading to a cosy nook at the back with shelves of board games. The walls are wood-panelled and exposed brick, and the floor is heavily varnished floorboards. Old pump clips cover the exposed ceiling beams, and tea lights in half-pint beer mugs sit on each table.

There's a small heated and partially covered beer garden at the front, with picnic benches and astroturf, and a larger one at the back.

Kake visited on a Wednesday afternoon in September 2015. I was the first customer when I arrived at 4pm, though two others arrived around half an hour later. Music was playing, not too loud. Service was friendly and helpful.

Accessibility: Two steps (with handrails on both sides) to get in. Another step to the ladies'.