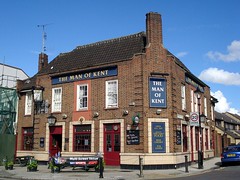 It's fairly plain inside, with a bare wooden floor and sparsely-arranged chairs and tables. Signs of the old division into public and saloon bars still remain, with two entrances and service from both sides of the bar (though the areas are now connected, with no internal barrier). The green-painted doors to the toilets and staff area echo the green tops of the stools lining the bar. Original coloured glass remains in the leaded windows, and there's also some original tiling in the ladies'. A row of paperbacks stands along one windowsill. Despite the plainness, it's not grotty, but everything is kept nicely clean, including the large mirror on the end wall above the fireplace (which judging by the guard and pokers may be still used in the colder weather). There are at least two TVs.

Kake visited on a Thursday early evening in July 2011. Although there are three handpumps on the bar, they were all unclipped. A tap offered keg Toby Bitter, but I had a half of Strongbow (£1.70). There were about nine or ten other people in when I arrived around 7pm, all sitting/standing at the bar. Horse racing was showing on the TVs, with the sound on quite loud, but there was plenty of conversation going on too. Service was friendly enough.

Accessibility: A large step to get in at the front. There's also a side entrance with a smaller step. It's all on one level once you're inside.