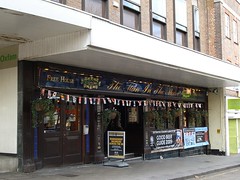 The Man in the Moon was a Wetherspoons pub in Stanmore. According to the April/May 2016 London Drinker magazine, it closed down in February 2016.

It's been in a couple of editions of the Good Beer Guide, and tends to have a real cider on as well as real ale. There are six handpumps on the front of the bar, and five more round the side.

There's very little natural light inside, but it doesn't feel gloomy; the booths around the edges have spotlight lighting, and the ceiling in the main part has backlit panels of stained glass depicting the man in the moon himself. Glass privacy screens separate the booths.

Kake first visited early on a Friday evening in October 2008. When I arrived a little after 5pm there were quite a few people already in — groups and couples as well as a couple of examples of the ubiquitous lone male Wetherspoons drinker. No piped music, nice buzz of conversation. By 6pm there were seats free, though perhaps not entire tables, and conversation was very lively but not even approaching rowdy. Service was friendly and polite; they even brought me cutlery with my panini instead of making me get it myself.

On another visit on a Thursday evening in April 2011, it was pretty full at 7pm, though there was a fair bit of turnover so people weren't left waiting for seats. A flatscreen was showing news with the sound off and subtitles on. Real ales this time included Marston's Old Empire, Rebellion Zebedee, and Shepherd Neame Royal Wedding; the cider was Thatchers Cheddar Valley.

Kake's verdict: This pub appears to be an example of the ideal Wetherspoons, though perhaps this is because Stanmore is a fairly posh area. (And the ale selection isn't as wide as at some larger Wetherspoons.)