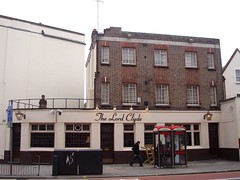 Gastropub on Essex Road in Canonbury.

It was known as Kenrick's until August 2007, when there was a change of management and a serious overhaul; the old grimy furniture was disposed of and the whole place got a proper clean. It's divided into two rooms, both with wooden floors and wood-panelled walls.

They have five handpumps on the bar, but when we visited in September 2010 as part of the 38 bus route pub crawl, there were only two real ales available; Harvey's Sussex Best and Redemption Pale Ale. On a previous visit by [Stig]? in January 2008, the ales were Spitfire and Adnams.

As of September 2010, food is served noon-3pm and 6pm-10pm Mon-Fri, 11am-3pm and 6pm-10pm Sat, and noon-7pm Sun photo of example Sunday menu. [Stig]? tried the salmon, prawn, and cod fish pie in January 2008. It originally arrived a bit undercooked but we didn't have to argue about sending it back for a reheat and we got some complimentary bread while waiting for it to return. We were pleasantly surprised by the large amount of prawns, and it tasted great. It came with a small side salad. On a November 2011 visit, Ewan tried a steak sandwich (£6.50) which came with some nice chunky crispy chips photo. They asked how to do it, and it came more or less medium-rare as requested, and was rather tasty.

They also do home-made scotch eggs as bar snacks (£2.50 as of September 2010), but we couldn't try these, because they don't do them on Sundays as they're too busy.

Appears to be child-friendly, on the evidence of our September 2010 visit.

As of September 2010, quiz night is Monday from 8pm. Their website advertises free wifi ("ask behind the bar for details").

[Stig]?'s verdict: The staff are friendly and the food is good.

Accessibility: A step to get in, but step-free through to the bar, seating area, and toilets once you're in.