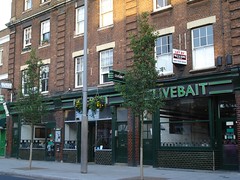 Livebait was a fish restaurant near Southwark Station, part of a small chain; it has now closed. According to the LondonSE1 forums, the premises are being taken over by burger chain Byron.

The information below is retained for people who want to know what Livebait used to be like.

Fish restaurant near Southwark Station, part of a small chain which in turn is run by the same company as Caffe Uno and Chez Gerard.

Kake, Bob, and Ilmari visited on a Wednesday evening in June 2008. We hadn't booked, but this wasn't a problem as there were plenty of spare tables.

Kake started with half a dozen rock oysters (£9) photo. These would have been fine, except that I twice found a sharp piece of shell in my mouth; pretty unforgiveable, given that some people like to eat oysters by swallowing them whole. Ilmari was very happy with his smoked salmon parcel (£7.50) though. Bob had wok-fried Szechuan-peppered squid (£7.85) photo.

For mains, Kake had the tuna steak in a soy, mirin, and honey marinade (£15) photo. Pleasingly, they asked how I would like the tuna cooked, and it did indeed turn up rare as requested. Unfortunately the dish as a whole was a bit silly; the plate was swimming in the salty marinade to the point where I ended up having to wait for the excess to drip off each piece of food before I ate it - and I like soy sauce. It came across as a dish designed by someone who knows nothing about Asian food but was forced to create some (cf. the salmon dish at the Greyhound in Carshalton). There was also some tough connective tissue at one end of the tuna steak; the steak was large enough though that I was happy to just leave this part.

I have forgotten what the others had, because I left it too long to write this review. We also had desserts, which were OK photo.

Service wasn't great either; although they weren't particularly busy at any point during the evening it was sometimes difficult to get the staff's attention, and our plates were left uncleared for rather too long. At one point we asked for an extra wine glass, but this concept seemed to be beyond them. Also, the waiter who brought Kake's main course had an extremely shaky hand; we weren't sure if this was nerves or a hangover.

The wine list is dominated by whites, divided by style - light, crisp, and refreshing; aromatic and fragrant; soft and round; and rich and full. They also have three roses and five reds.

Kake's verdict: Unlikely to come here again; it's not cheap, and both food and service were unsatisfactory in a way that suggests a systematic problem rather than an off night. If I do come again, I'll stick to something simple like plain grilled fish.

Leon says that Livebait used to be good when it first opened some years ago, but agrees that it has gone downhill.

Comment added by Miles: Was truly innovative when it was first opened by theodore kyriacou (also of the Real Greek), and had a wet fish stall as well as dining. Was taken over by a chain, went downhill and closed. Not an unfamiliar tale.