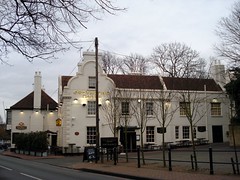 Kake, Bob, Robbie, and Martin visited on a Thursday evening in February 2008. Beers available were Young's Special, Young's Ordinary, and Bombardier. Kake arrived early and took advantage of the free wireless while enjoying a very generously-sized pot of tea (£1.70 for a pot large enough for 3-4 cups).

We also tried the food. Kake had the grilled blackened salmon with chilli noodles (£8.75). This was so bad that I didn't bother finishing it — the salmon was overcooked and had clearly been sitting under a heat lamp rather than cooked fresh, the noodles were basically just mixed with sweet chilli sauce from a bottle, and we were taking bets on how many days ago the accompanying rather grey-looking green beans had originally been cooked. We were also unimpressed by the charcuterie plate (£11) we shared as a starter; although the portion looked generous to begin with, it was quickly revealed that the pile of meat in the centre was actually a couple of slices of parma ham carefully arranged on top of a mound of undressed leaf salad; and the plate was padded out with a large quantity of (decent enough) bread photo.

Service was friendly, but it was clear that they were understaffed. The sole waitress was rushed off her feet — though she stayed calm and friendly throughout, this is probably the reason why she failed to ask why the salmon dish was being sent back only half-eaten.

Other points of note: we found it slightly too warm for comfort - perhaps an overreaction to the slightly chilly weather outside, perhaps a side-effect of its double identity as a hotel. Also, the piped music during the afternoon was extremely cheesy, and not even quiet enough to be easily ignored.

On another visit by Kake and bob in August 2011, the food was a little better in general, but some dishes worked better than others. A starter of scallops and black pudding (£6.85) was good; the scallops weren't overcooked, and the black pudding and accompanying pea puree were appropriate and well-executed. However, Kake's main course of grilled red snapper was woefully overcooked; I only managed to eat half of it. Despite the three years between this and our previous visit, the response of our waitress to this was pretty much the same; she showed no concern that I hadn't finished it, and very little interest in my feedback on the dish.

Free wireless internet is provided via The Cloud, and is available to pub customers as well as hotel guests — ask at reception for a 24-hour username and password. When we tested this in February 2008, it worked fine, with good signal and bandwidth.

Kake's verdict: I'm very unlikely to give the food here another chance; of the four things I've eaten here, only one was any good, and one was actively nasty. We only ate here in the first place because none of the other Carshalton pubs were serving food; next time I go out for an evening's drinking in Carshalton, I'm bringing sandwiches.