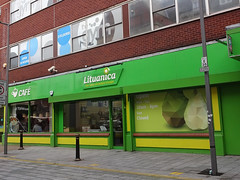 Lithuanian and Eastern European cafe and grocery shop in Barking. It's part of a medium-sized chain which also has branches in Beckton, Stratford, Walthamstow, and a few other places outside London (mainly in Ireland).

An aisle of snack foods and soft drinks near the entrance offers interesting and unusual options such as cheese and onion peanuts (highly recommended by Kake) and kvass. Further back, a refrigerated display runs the length of one wall, piled with meats, cheeses, smoked fish, and deli items such as chopped herring salad.

Another wall is taken up by a bank of freezers stocked with several kinds of dumplings (including cepelinai, pelmeni, and pierogi) as well as frozen fish such as pangasius and pollock. Shelves in between carry a vast array of pickles, jars of smoked fish, biscuits, cakes, and fresh bread.

Next to the payment counter there's a chilled display offering prepared mayonnaise-based salads such as crab salad and cheese salad, as well as fresh and salted pork. A small display of books (not in English) and health care products sits behind the counter.

The cafe is in a side room; we haven't explored this properly yet. However, in its previous incarnation as a hot food takeaway counter, we noted dishes such as borscht, and pork with white sauce (in October 2012).

Accessibility: No steps to get in. Some of the corners inside are a bit tight. Kake managed to get a pram around most of it, though there is one dead end where reversing is necessary.