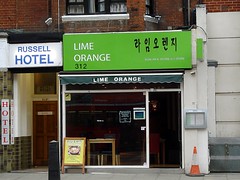 Korean restaurant near Victoria Station, with the Korean name of 라임오렌지. They also do takeaway. According to a sign in the window as of June 2013, they use halal chicken.

It's fairly small, seating around 40-50 people. The frontage is entirely glass, giving plenty of natural light at the first couple of tables inside, though it's darker further back. Tables are of varnished pale wood, bare of cloths, and the chairs are comfortably padded pleather. A display of empty picture frames hangs on one wall.

Kake visited on a Thursday lunchtime in June 2013. When I arrived a little after 1pm there were four or five other customers in, and it remained quiet throughout my visit. Music was playing, fairly quietly.

I started with japchae (잡채; £5.50) photo, a stirfry of glass noodles with beef and vegetables. The vegetables here consisted almost entirely of onion, which made the dish a little unbalanced. However, the beef was tender and flavourful, and the portion a reasonable size.

Hot stone pot seafood bibimbap (해물돌솥; £9.50 including miso soup) photo was also disappointingly onion-heavy, with just a few shreds of red and yellow peppers and spinach to represent other vegetables. The seafood was primarily squid and small prawns, joined by a single large mussel and a single king prawn. The rice itself was fine, though the onion overload rather got in the way of enjoying it. The accompanying miso soup was unremarkable.

Service was fine, and tap water arrived swiftly on request. A 10% service charge was added to the bill photo.

Kake's verdict: Disappointing. The choice of ingredients showed clear signs of cost-cutting, but I didn't feel this was reflected in the prices.

Accessibility: A step to get in. Toilets are down a flight of stairs with a sturdy handrail on one side and no bends.