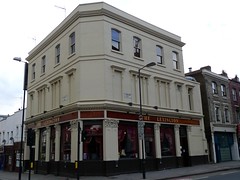 A bar on Pentonville Road not too far from King's Cross Station, formerly known as Clockwork (though it's had many other names over the years).

Inside is a large open space, with the bar on the street-facing side (though the bar back obscures any view of Pentonville Road itself). There are some large seats with tables in a booth style along one wall, more seating on a raised area opposite the entrance (which is on Penton Street), including a DJ booth, and large tables in the centre of the room. There is also a couch area in the centre of the room on either side of a bank of tables, with some comfy ornately-decorated sofas. Furniture is modishly dilapidated, slightly antique chairs and rickety wooden tables.

Upstairs is a large room with a separate bar, steps down to a stage area with plenty of room for audience to sit or stand, and a DJ booth in the lofty heights at the back of the room. Live music, comedy and other events take place on a regular basis and there's generally a cover charge.

The main bar downstairs features two ale handpulls (changing regularly, but with Redemption ales a regular feature as of early-2011), but not a great range of draught lagers aside from Brooklyn (at a whopping £4.80 a pint in February 2011), comprising Amstel and Guinness along with one or two other basics. However, they have plenty of bottled beer, including an excellent selection of interesting, well-hopped American microbrewed beers (around £4.00 or more a bottle, though, but including offerings from Goose Island, Brooklyn, Anchor, and others). The wine was drinkable, but the focus is definitely on spirits. Chalkboards list their many American bourbon whiskies on offer, including plenty of obscure single barrel producers, all lined up along the back wall behind the bar.

There's a popular quiz night on Mondays, which features prizes for winners and second-place getters. Entry is £1 per player, and it starts at 8pm. Ewan visited for the Christmas 2008 quiz, narrowly missing out on first place -- they offered free mince pies and sherry, as well as bonus presents at the end of the night, to all competing teams. The host keeps good control of the quiz, with plenty of humour, and it all works very well.

Clientele on that visit was very much music industry and indie scene types, with haircuts and fashion to match. Obnoxious perhaps, but not too unpleasant considering the bar is close by Angel Station in trendy Islington. It can sometimes be quieter on a Sunday afternoon when DJs spin relaxing tunes as part of the Hangover Lounge, but it can also be busy depending on whether there's a gig on upstairs.

Their kitchen serves food noon-3pm and 6pm-11pm Monday to Friday, noon-11pm Saturday, and a special Sunday menu noon-9pm on that day. Ewan's nut roast (£8.50) photo was really quite large for the price and was perfectly tasty and good value; since that time the kitchen has been taken over by new operators several times and the roasts have definitely varied in quality according to Ewan's assessment.