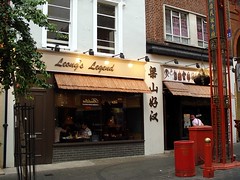 Leong's Legend was a small Taiwanese restaurant on Macclesfield Street in Chinatown. Around October 2016 this branch was closed down along with their other branch on Lisle Street, and a new one opened around the corner on Gerrard Street. According to Mr Noodles, as of November 2016 the Macclesfield Street location is occupied by a new business called Le Hanoi.

The decor is all wood and basketweave and long scary weapons on poles, and the larger tables by the front window are separated off from each other with screens. It's kind of a teahouse ambience, and smarter than your usual scruffy dim sum joint, but more traditional and less overpriced and chainlike than the new dim-sum-and-cocktails places that have been springing up around London. Another difference from the normal dim sum places is that the largest group we've ever taken here consisted of seven people, and we suspect they might have trouble seating more.

Kake and various friends have visited for dim sum lunches a few times now, most recently in May 2011. Dim sum is served between 11:30am and 5:30pm, according to a menu seen outside in June 2008. We usually come on weekdays and arrive at 1pm, and have never had to wait for a table; it's probably busier on the weekends.

The 小籠包 (xiǎo lóng bāo/soup dumplings, transliterated here as "siu loung bao" rather than the more usual "xiao long bao") are perhaps the best we've found in London so far. They've always had a pleasing quantity of soup, though on our May 2011 visit the skins could perhaps have been a little thinner. Both pork and crab versions (£5.50 and £6.50 respectively for eight, as of May 2011) are good.

Seabass cheung fun (£2.80, sampled in July 2008) is also worth a special mention, as we've not seen it anywhere else and it worked very well; the fish was cooked just right and there was just the right amount of ginger included. We've ordered braised pork belly rice (£4 as of July 2008) several times and always found it good. Har gao (steamed prawn dumplings) are also just fine.

Pan-fried turnip paste (£1.90), when sampled in July 2008, was saltier than we've had elsewhere, but also more generous with the meat (perhaps even a little too generous); when tried again in April 2009 it had lost the excessive saltiness but was also notably less generous with the meat. The only thing we've consistently disliked here is the Legend's Bun (£2.80).

They cope well with vegetarians, too. Kake, Ewan, and Alice visited on a Friday lunchtime in August 2008, and found that Ewan's vegetarianness was no problem; the steamed vegetarian dumplings (£3.80 for six) photo, the yuba-filled vegetarian cheung fun (£2.50) photo, the crispy shredded turnip (£2.50 for three) photo, and the deep-fried dough sticks (£1.80 for six) photo were all suitable. We particularly enjoyed the steamed vegetable dumplings, and even the omnivores would happily order them again. (Note however that the vegetarian cheung fun were no longer on the menu on our April 2009 visit; instead there were fried dough stick cheung fun, which were less successful.) As of May 2011, vegetarian items are marked on the main menu with a little picture of a cabbage, but not marked at all on the dim sum menu.

The most expensive dim sum lunch we've had here was £15/head for food plus tea (May 2011), though this did include a couple of dishes from the main menu too. Pleasingly, the tea (£1/person) is fine — one might think that this is obvious, but we've had some pretty awful tea in dim sum places over the past couple of years.

Our verdicts: Leon has expressed the opinion that this is currently the best dim sum place in London. Kake's verdict is similar; it really is a nice little place, with very fair prices and high quality. Although some reviews mention inconsistency, we've been enough times between us now to conclude that these were simply initial opening hiccups, and things have now settled down. Nick really liked it, and now has it as first choice for dim sum. itsbruce has eaten here in the evening and found the food to be very high quality (the spicy pig's tripe dish is recommended). itsbruce also loves the very literal names for the menu items (last time I was here, I had "Boiled fish in very spicy soup". It was very spicy.)

Accessibility: One step up to get in, quite cramped inside, toilets down a flight of stairs.