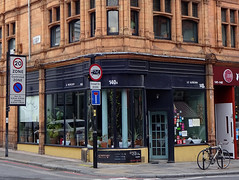 Inexpensive French restaurant on Upper Street in Islington. It does get busy, due to being almost directly opposite the Almeida theatre, and it's also rather small, so it might be best to book.

Kake, bob, and Liz visited on a Saturday evening in December 2007. We'd booked for 7pm and had been told we'd need to give the table back by 9pm. This wasn't a problem, as service throughout the meal was prompt, though not to the extent that we felt rushed.

One of the selling points of this place is the prices; on the regular menu, the starters are all £4, the main courses are all £6.45, and the desserts are all £3. Side vegetables and chips are both charged separately, but they're only £2. They also have a few specials which are more expensive, but you can eat perfectly well from the regular menu.

Kake started with the smoked chicken filo parcel (£4); it was tasty enough, and a decently sized portion. Liz had the grilled aubergine with a red pepper and paprika mousse (£4); she thought it was quite tasty, and again the portion was a decent size. Poor Bob drew the short straw; his portion of tiger prawns with garlic butter and chilli aioli (£4) was tiny photo. They were also possibly overcooked.

Liz's main course was the seared mackerel with beetroot, fennel julienne, and lime pickle (£6.45); she seemed very pleased with it. Kake chose from the specials menu; beef daube served with some very lovely garlicky mashed potatoes. bob had the rib eye steak (£6.45) which was okay but nothing special.

Liz was the definite winner at dessert; although her roast rhubarb (£3) was a little undercooked in places, the basil icecream that came with it was fantastic. Kake's cheese plate (£3) wasn't bad, but the cheese was too cold. The biscuits that came with it were uninteresting, but you can't expect miracles at that price. bob had sticky toffee pudding which was fine.

The wine list was short but interesting. Most expensive red was just under £30. The house red was about £12. All of the wines we tried were fine.

We were comped three glasses of port at the end of our meal; a very pleasant surprise since it was just a nice touch, rather than because they needed to apologise for anything. Will happily come back here; you can hardly not, at these prices. Probably wouldn't order the prawns again though.

Accessibility: It's worth reiterating that this place is tiny; there's not much space between the tables, and the toilets are tucked away down a very narrow staircase.