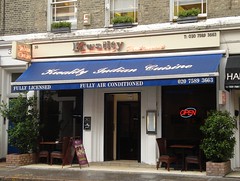 bob and several others visited on a Saturday night in February 2009. We had no trouble getting a table for the five of us. The restaurant can seat at least 30 covers.

Food was average Indian fare, nothing really special. Including beer we spent £25 a head. We got adequate amounts of food for this.

bob's verdict: Nothing special, but convenient for South Kensington Station and Imperial College. It used to be where the IC sports teams would go for curry.

Accessibility: One step up to get in. Toilets are located downstairs.