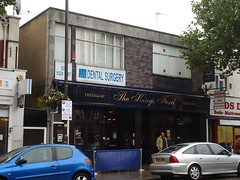 Another of the Wetherspoons shop conversions, this has the characteristic deepness of the genre, stretching back quite a long way from the street, but the ceiling is not quite as low as others of its type, nor is it quite as narrow. However, there's still a lack of natural light except right at the front. Booths line one wall, and chairs and tables fill the rest of the space.

Kake visited on a Tuesday afternoon in September 2011. The selection of real ales was rather uninspiring: Brentford Best (£1.99/pint), Courage Directors, Adnams Bitter, Abbot Ale, and Ruddles Best. There were plenty of people in when I arrived around 4:30pm, and no music playing.

Accessibility: No step to get in, and it's step-free to bar, seating area, and RADAR-locked accessible toilet once you're in. Other toilets are up a wide flight of stairs with sturdy handrails on each side.