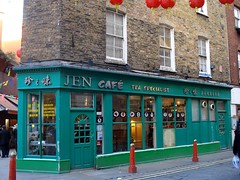 Chinese cafe in Chinatown. It specialises in hand-made dumplings and noodles, as well as interesting soft drinks including bubble tea. It also does takeaway.

The tiny, wedge-shaped interior seats only about 25-30 people at five tightly-packed tables, and three more on high stools at a counter at the side. One wall is covered with mirrors, making the space seem slightly less cramped. The floor is stone tiles, and the space is lit by recessed spotlights in the utilitarian ceiling.

Kake has visited twice now, in July and August 2016, both times on a Thursday early evening. It was quite full when I arrived the first time, but they found me a space on the corner of a table which already contained two other groups of two. I noticed a larger party (five people) were asked to wait, but the fast turnover meant they were seated within 5 minutes. On my second visit it was less full but again I was placed on a table with others already on. It seems to be the norm to share tables.

Beijing dumplings (boiled pork dumplings; £5 in July 2016) were fine, with no gristly bits or cardboardy texture to the filling. The wrappers were whiter and somewhat less robust/chewy than I've had elsewhere — I actually prefer a thicker/chewier wrapper, but these were a nice change.

Fried vegetarian dumplings (£6 in August 2016) were less impressive; they had very little flavour and the filling primarily consisted of glass noodles. They were cooked competently enough, though, and the wrappers were sound.

My order was taken quickly both times, and the food also arrived quickly. I asked for tap water twice on both occasions, but it never actually turned up on my first visit, and on my second it came in a small plastic cup, less than half full.

Overall, service was focused on efficiency rather than hospitality, and there was a clear expectation that everyone was on the same page with this being a quick in-and-out operation with no frills; I saw a few other potential customers decide to leave after they were treated somewhat brusquely by the staff. No service charge was added to the bill.

Accessibility: No step to get in (just a bit of a ridge at the threshold), but it's very cramped inside and it would be hard to fit a wheelchair in. Toilets are in the basement, down a narrow flight of stairs.