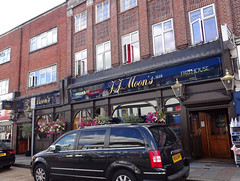 It's a fairly standard Wetherspoons shop conversion, though larger than most in the genre, as it stretches across two shopfronts as well as going quite a long way back. The lighting is dim, the carpet is swirly, and the walls are wood-panelled. Several large square pillars, possibly structural, mark the line which would previously have divided the two halves, breaking up the space and making it feel somewhat cosier than it would have been otherwise.

Most of the seating is at normal chairs and tables, but there are a few high tables and stools near the bar, and several booths along one wall. A dais at the back offers views across the pub as well as a modicum of natural light through the opaque doors of the fire exit.

Kake visited on a Thursday lunchtime in September 2016. There were quite a few people in at 12:45pm, both groups and people in ones and twos. No music was playing, as is usual for Wetherspoons pubs, but there was a pleasant buzz of conversation.

The dozen handpumps on the bar offered six real ales, all priced between £2.29 and £2.59/pint: Cronx Nectar, Portobello Carnival Pale, Hop Stuff Fusilier and APA, Sharp's Doom Bar, and Greene King Abbot Ale. They also had Old Rosie cider on handpump. A pint of lime and soda was 80p.

Food is served all day from a chain-wide menu. There's free WiFi via The Cloud, which requires registration but doesn't check whether you've used your real email address.

Child-friendliness: According to the 2017 Good Beer Guide, children are permitted until 9pm. There are nappy change facilities in the accessible toilet (which has a RADAR lock, but a sign says there's a key behind the bar).

Accessibility: Step-free to get in via the left-hand entrance (the other has a small step). Almost all the seating is on the level. Level access to toilets too, including a RADAR-locked accessible one.