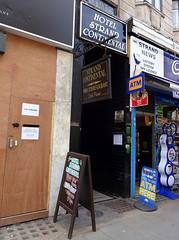 Indian restaurant located on the second floor of the Strand Continental Hotel. Founded in 1946, it was originally a private club.

It's fairly basic in decor, seating around 70 people on mismatched chairs lined up alongside formica-topped tables. Scuffed canary-yellow walls are adorned with Indian art along with portraits of Gandhi, Nehru, and other important Indian figures. A tiny bar in the centre has fonts for Cobra and Kingfisher lager, with the shelves behind bare aside from a few pint glasses and a stash of till rolls and other restaurant paraphernalia. A door left open next to the bar offers a glimpse into the kitchen.

Kake visited on a Friday lunchtime in April 2018. When I arrived just after their opening time of noon, there were two other customers, and by the time I left around 12:45 it had started filling up rapidly. No music was playing.

Egg curry (£5) photo consisted of two halved hard-boiled eggs in an indistinctly spiced sauce with slivers of undercooked green pepper and the occasional piece of underripe tomato. Puri (£2 for two) were doughy and greasy.

The hotel bar on the floor below is also open to non-residents, and according to Pubs Galore comments (linked below) as of December 2012 the staff will get you drinks from there if you like.

Kake's verdict: You'd come here for the history and nostalgia, not the food.

Accessibility: Two flights of stairs to get in, with a handrail on one side. Toilets are on the floor below. The cubicles in the ladies' are very narrow, but the doors open outwards.