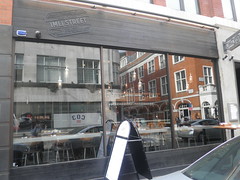 Imli Street was an Indian street food themed restaurant in Soho, part of the Tamarind group. It closed down in early 2017.

Note: Along with the name change in early 2013, Imli Street underwent a refurbishment and change of menu. Some of the details below may be out of date.

On a January 2009 visit, itsbruce's main dishes (papdi chaat, bhel puri, and prawn with green mango salad) all arrived a bit before Dean's (spiced potato cakes, sautéed lamb, spicy squid) but this is understandable given that itsbruce chose exclusively from the cold menu. The dishes were all good and varied (e.g. the lamb was peppery as opposed to the chili heat of the dal side dish). The only disappointing dish was a green salad side, which arrived last of all and was designed with presentation in mind rather than eating. Three dishes each plus a side and a soft drink came to just under £42 including the service charge.

On another visit that month in the evening, Ewan and Sarah shared some dishes, including chilli paneer (with firm chunks of paneer, but a rather bland tomato sauce), a fine aubergine dish, and some spicy squid. Each of the small dishes was around £5, and though none was bad, they didn't stand out especially. The naan bread was perfectly good, if not huge.

On a lunchtime visit in early 2008 by various RGLers, the whole party opted for the set menu, which was basically a thali. All meals included small bowls of papdi chaat (a very tasty combination of 'wholewheat crisps', bean sprouts and sweet yoghurt), dal curry, a curry featuring 'vegetable of the day', and fresh-cut salad. The fifth bowl was either a meat curry or (for those choosing the vegetarian option) a paneer dish. The meal was served with rice and a small dish of chutney photo of the vegetarian option.

Ewan found the dal to be the best of the dishes, with the 'vegetable of the day' (mushroom) curry spicy but slightly disappointing. Kat was happy with her chicken dish (which was brought out in error, as she had ordered pork, but was offered free of charge while the chef readied the pork curry). Kake and Ewan both enjoyed the paneer dish, which had cubes of firm paneer in a tasty green sauce - spinach? - and wasn't overly rich like paneer dishes can often be.

As well as a small selection of wines and beers, they also offer interesting soft drinks. Ewan tried the fresh lime juice (£2.85, available either sweet or salty), which was refreshing although with an odd taste incorporating both salt and sugar. Kake tried the thyme lemonade (£2.95), which was exactly what it sounded like, and had just the right amount of thyme flavour.

Service was attentive without being overbearing and the food was brought out promptly. An optional 12.5% service charge was automatically added to the bill — slightly over the odds for a casual restaurant in London.

According to their website, Imli was "launched by the team behind Tamarind" (a Michelin-starred Indian restaurant in Mayfair).