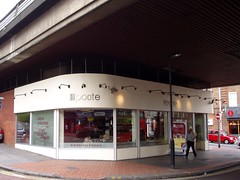 Il Ponte was an Italian restaurant situated directly under the flyover on Croydon High Street. It closed around the start of 2012. As of late 2013 the premises are occupied by an American restaurant called Buffalo Bar and Grill photo.

The owners of Il Ponte opened another Italian restaurant, Ponte Nuovo, across the road, but according to an interview in the Croydon Advertiser, they see this as "a completely new restaurant" rather than simply a renaming of Il Ponte.

Italian restaurant situated directly under the flyover on Croydon High Street. It's part of a small chain which also has branches in Crystal Palace, Epsom, and Sutton.

It's quite spacious inside, though it doesn't feel cavernous photo. There was no trouble fitting in our party of six on our Friday evening visit in March 2008.

The food is fine, albeit not mind-blowing; and reasonably priced, albeit not outstandingly cheap.

We began with some shared starters; bruschetta (£4.45), funghi e ricotta (£6.45), and prosciutto e melone (£6.65). The mushrooms were good; the tomato sauce they were served with was just acidic enough to counterbalance the richness of the ricotta. The prosciutto was a little dry/tough, but had a decent flavour. Ewan comments that the bruschetta were very good, the tomatoes were cold but chopped up and flavoured nicely, not too bland.

Kake was a little less impressed by her main course of risotto allo scoglio (seafood risotto, £9); although the proportion of seafood to rice was about right, and the rice was cooked to the degree of doneness I prefer (which many people consider overdone), none of the clams had opened, and the dish didn't display the level of creaminess that comes from proper selection of rice and constant stirring to release the starch into the sauce. Basically, it was a decent enough rice dish, but it wasn't risotto. Still, it was a decently sized portion and the flavour was fine. Ewan adds that the pizzas were fine, with a fairly crispy base, but nothing spectacular.

Service was friendly enough, and one of our waiters even let us take a photo of him without a murmur.