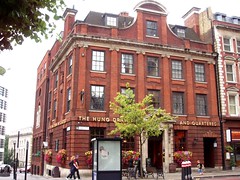 Fuller's pub in the City.

Despite its imposing exterior it's relatively small inside, with seats for about 50-60 people plus standing room around the bar. Seating is a mix of high chairs and tables and normal-height ones.

The ceiling is high, the lighting is chandelier-style, and large portraits of the kings and queens of England hang in ornate frames on the walls. The floor is varnished dark wood, augmented here and there with patterned carpet and some nice tiling.

Kake visited on a Monday morning in September 2013, arriving shortly after their opening time of 11am. There were already two other customers in, and a couple more arrived during my visit. Music was playing, not too loud. All of the normal-height tables were already set with napkins and cutlery, but they didn't mind me sitting at one of these with my drink.

The handpumps on the bar were all clipped for Fuller's ales: London Pride, ESB, HSB, Discovery, and the seasonal Red Fox. A pint of lime and soda was a pleasingly-cheap 40p.

Accessibility: No steps to get in, and it's step-free to the bar, seating, and accessible toilet (which has a sign on it stating that the key is behind the bar — it's an ordinary lock, not a RADAR one). Other toilets are down a spiral staircase with a handrail on one side. About half of the seating is at high chairs and tables, but the rest is normal-height.