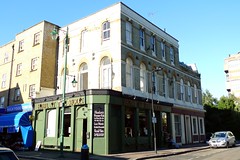 It underwent refurbishment in mid-September 2012, so some of the details below may be out of date, as our visit was prior to this.

This single-room street-corner pub has large windows to let the light in, and a comfortable, non-forced ramshackle feel. A wide range of seating is on offer, though generally with only one example of each type: a banquette, a sofa, an armchair, and a long low bench flanking a coffee table. A large knot-gouged wooden table stands under a mirror on a dais at the end, with a church pew along one side and mismatched chairs clustered around. A small bookcase holds board games including both Monopoly and "Anti-Monopoly".

The bar is lined by tall but comfortable-looking stools, and there's a reasonably-sized standing area behind these. There's also some outside seating provided by chain-suspended wooden benches.

There were a fair few people in during my visit, though there were always at least a couple of seats free. The ages of the clientele appeared to range from around 5 to around 75, with an equal mix of women and men. Music was playing: James Brown, Jimi Hendrix.

Free wifi is available, with the password displayed to one side of the bar (worked fine when tested in September 2012).

Accessibility: A step at one door, but only a small ridge at the other. Step-free to bar, much of the seating, and the toilets once you're in, though the route to the toilets is a little narrow. One of the tables is on a dais.