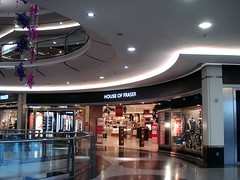 A large branch of this national chain of department stores. It's located in the north-west corner of the Centrale shopping centre in Croydon, close to Centrale Tram Stop and West Croydon Station.

It sells women's fashion and menswear from a large number of well-known labels, as well as homewares.

As of March 2019 there are two cafes within the store: a branch of Caffè Nero on the top level and Seima's Tea Room on the lowest level.

Kake visited Seima's Tea Room on a Friday lunchtime in March 2019 and ordered their "sandwich platter" (£7), which included a pot of loose-leaf tea, two "half" or three "quarter" sandwiches, and a small leaf salad. I chose two "half" sandwiches with fillings of cucumber & tomato and tuna mayo photo (other options were cheese & tomato and egg mayo).

The cucumber and tomato were sliced nice and thin, and were fresh and crunchy. The tuna mayo had enough sharpness (presumably from a vinegar-heavy mayonnaise) to be interesting, and wasn't at all dry. The bread was granary and fairly undistinguished. The tea was good, and they explicitly asked me if I'd like more hot water for a second brew.