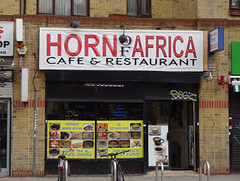 Somali cafe and restaurant on Lewisham Way, on the borders of Brockley and New Cross.

It's small, seating just 40 people on mismatched chairs at wood-effect melamine tables. The decor is casual, and a flatscreen hangs on one wall. The feel is much more of a cafe than of a restaurant.

Kake visited on a Tuesday lunchtime in August 2018. There were four other customers when I arrived a little before 12:30pm, with lots of others in and out while I was there. Everyone except me seemed to be a regular. The flatscreen was showing some sort of TV programme with the sound on, not too loud.

Although the menu outside photo showed a range of dishes, when I asked what was available that day I was only given a choice between meat, fish, and rice.

I went for the fish, which turned out to be grilled salmon served with rice, mixed vegetables, and a small portion of spiced spinach and potato photo. The salmon was quite good; nicely seasoned, and with a crispy skin but not overcooked flesh. The rice was OK if a little dull, though the vegetables on top helped a bit: mixed peas, sweetcorn, green beans, and carrots, enlived by a good amount of lightly-sauteed onion. The spinach and potato was also OK, though the spinach had a texture and flavour that made me wonder if was tinned.

Unlike other Somali cafes/restaurants I've been in, I wasn't brought complimentary soup or fresh chilli sauce to go with my meal. Service was fine, though, and tap water arrived swiftly on request.

I also had a takeaway fish samosa, which was really good. The pastry was well-fried to create a good browned flavour, and substantial without being heavy. The fish filling (possibly well-cooked tinned tuna) was accented with finely-chopped barely-cooked onion and a good hit of fresh chilli.

Accessibility: A short but very steep ramp to get in, really a smoothed-over step. Toilet not checked.