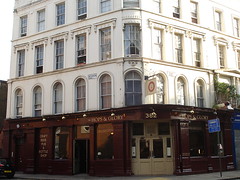 Inside, it's a fairly small room with worn bare floorboards, crammed with chairs, tables, beer barrels for resting one's drink on, an old fashioned chest of drawers, and a piano in one corner with the front missing and all the hammers showing. A gramophone sits behind the bar, presumably only for decoration. The bar back is glazed burgundy bricks, with an arched mirror in the centre. Large windows on two sides let in plenty of light.

Kake and bob visited on a Sunday early evening in September 2014. Only two of the four handpumps were on, both offering ales from Purity (served in handled jugs). However, there were plenty of interesting things on the dozen or so keg fonts, including Black Isle Porter (£2.10/half).

There were about a dozen people in at 5pm, mainly clustered around the bar (making it a little tricky both to get served, and to get through to the toilets). Music was playing, not quite too loud for conversation.

Food is served from a fairly bar snacky sort of menu photo. They'd run out of Kake's initial choices of courgette & smoked garlic arancini and smoked salmon bagel with labneh & lemon, but a bratwurst with fries (£8.50) photo made an adequate second choice. The bratwurst was fine, and the chips were a generous portion that stayed hot until finished. The pickled gherkin on the side was a nice touch, though it was a little soggier than ideal and Kake also wished there had been more of it. bob was happy enough with his burger ("Turner & George Beef & Bone Marrow burger"; £9 including fries); you could certainly taste the bone marrow.

According to the 2015 Good Beer Guide, there's a heated patio garden, dogs are welcome, and there's live piano music on Thursdays. According to their website as of September 2014, "children, dogs, & bicycles [are] welcome", though there are no apparent baby change facilities, and it's not obvious where one could put a bike without it being in the way.

Accessibility: A tiny step to get in (kerb cut height). The toilets are in the basement, down a narrow flight of stairs with bends and a non-continuous handrail.