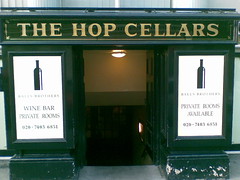 Now closed; used to be a wine bar in Borough. As of April 2009 the site has been taken over by the Red Car Pub Company and reopened as Wheatsheaf, SE1 1TY.

The information below is retained for people who want to know what it used to be like as the Hop Cellars.

Bob visited in early 2008. Adnams was available at £3.10/pint. The food was quite tasty; the smoked haddock at about £11 was very good.