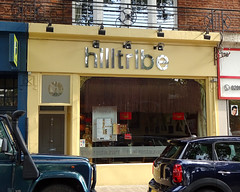 It's quite small, seating only around 32 people. The floor is varnished wood, and wood carvings are hung on the walls alongside large prints of flowers. Rattan-style table mats are laid on dark-varnished tables, with flower buds in small vases.

Kake and friend visited on a Monday evening in July 2019. Arriving a little after 6pm, we were the first customers of the evening, but others arrived while we were there and by the time we left at 7:45pm there were half a dozen people in. Peaceful music was playing quietly.

Prawn crackers were placed on the table as we sat down; they were pretty good, with a distinct flavour of prawn.

Tod mun khaw phod (sweetcorn cakes) photo were perhaps slightly greasier than ideal, but there was a good ratio of sweetcorn to batter, the outsides were nicely crisped, and the sweetcorn retained a decent amount of juiciness.

Pla goong (spicy prawn salad) photo had a reasonable amount of chilli heat, though it certainly wasn't "Thai-spicy". The prawns were nicely handled, not overcooked, and had absorbed the flavourful dressing quite well. Most of the shell had been taken off, leaving just the tail as a "handle".

We were warned that the Chiangmai sausages photo would take a while to cook, so it wasn't surprising that they were the last dish to turn up (we'd asked for things to come when ready rather than in strict courses of starters-then-mains). They were very good, with a lovely coarse yet coherent texture. The toasted cashews they were served with complemented the sausages very well (and this is coming from someone who generally doesn't like cashews).

Service was friendly and helpful, and they kept us well topped up with tap water. A 10% service charge was auto-added to the bill.

Kake's verdict: I was very pleased with this overall, and would definitely come back if I was in the area.

Accessibility: No steps to get in, but the door is quite heavy. Also no steps to the toilets, and the gents' doubles as an accessible cubicle (according to a sign on the door — we haven't checked inside).