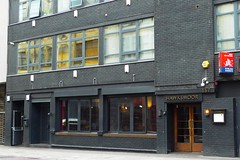 A very well-reviewed and externally unassuming steak house on Commercial Street at the north edge of the City. Its popularity means that it's strongly advisable to book in the evenings, though walk-ins at lunchtime may be possible.

All the meat is sourced from the Ginger Pig and is of high quality. They mark weights in grammes and can obtain pretty much any cut of meat if you ask 48 hours in advance. Although the menu is focused on steak, they do have a daily-changing vegetarian option. They usually have extra steak cuts that aren't on the menu; these are marked on a board on the wall.

Martin visited in January 2009. Three steaks on the menu were priced per 100g rather than outright — prime rib and porterhouse (both £6/100g), and Chateaubriand (£12/100g). The menu also warned that the prime rib and porterhouse are large. Upon enquiry, it emerged that one must select from certain fixed weights — we asked about the porterhouse and were offered 750g or 800g. Fortunately, they are quite happy for two people to share the larger steaks (in the end, two of us shared the 800g porterhouse).

The quality of the meat and cooking were excellent — the steaks are grilled over charcoal, giving a great smoky flavour to the outside of the meat, with the inside juicy and melting. To accompany, we had chips, field mushrooms and creamed greens (all around £4-£5). The menu proclaims the chips as "triple-cooked" — they were superbly crunchy. All portion sizes were large — apart from the very large steak, the sides were all more than enough to share, and the starters we had (Tamworth belly ribs and crab and crayfish cocktail) were both very substantial. Neither of us had room for dessert (which seems a common theme among the reviews).

bob and several other RGLers visited in October 2009 to celebrate bob's birthday. We booked a table for 10 and they seated us in the back room. For large parties they do take credit card details for the booking, and say there will be a £10 charge per person for no-shows; we were one person short but there was no extra charge. All in all it was a very good meal. bob thoroughly enjoyed his 1.1 kg of Chateaubriand and still had enough room for dessert (a slightly disappointing trifle; £6). They lost one of the steaks from our order, but were quick to rectify this and didn't charge us for it. Other than this, service was fine and they coped well with the large group.

James and DrHyde visited for Sunday brunch in early September 2010. We didn't book but were seated easily at ~11am. We shared the Hawksmoor breakfast (designed for two, £35) photo, featuring large smoked bacon chop, grilled bone marrow, pork, beef & mutton sausages, Bury black puddings, bubble & squeak (also with meat), grilled mushrooms, roast tomatoes, and trotter baked beans on the side photo. The breakfast itself was utterly fantastic. Everything was perfectly cooked and high quality. The portion size was perfect for two hungry big-eaters. The only disappointment was the black pudding which wasn't bad, just by comparison was boring as everything else was so much better.

This was followed up with two cornflake milk shakes (£4.50 apiece) which were delicious, smooth and did not contain small cornflake grounds as you might expect (a good thing). Over the course of the meal, we each tried two cocktails: a bloody mary no.10 (made with blended fresh vegetables, very fresh tasting, £8) was very good (although I was looking forward to the now-discontinued consommé-containing bloody mary instead), the tobacco-infused old fashioned (£8) was possibly the best cocktail I've tasted all year and the Black Velvet (Meantime London Porter and champagne, £9) and Corpse Reviver #2 (Maraschino cherry and other tasty things, £8.00) were also both very good. They offer a bottomless bloody mary for £14 with your brunch, though this is a different, more traditional recipe.

We ordered a pot of assam tea between two and were dismayed to find they provided mint tea instead. They dealt with this immediately by providing two pots of assam on the house. Total spend for two, about £85 for what we unanimously agreed was the best breakfast we'd ever eaten.

Ewan and Kerry also walked in for the breakfast on Easter Sunday, albeit around 4pm, though they hadn't yet sold out (this, rather than the time, is the problem with arriving late for breakfast). It was as enjoyable as DrHyde relates above, although Ewan felt the toast was a little too chunky and crusty to be effective in mopping up. Aside from that, it was all excellent.

They serve a large range of cocktails (including two pages of juleps and a range of punch bowls) at about £7.50 a glass, a few beers (including Meantime Union and London Pale Ale, and some Kernel beers) and good range of wines varying from £25 a bottle to silly money. They also have a very well-stocked bar for spirits. In February 2009, Martin tried an IPA, which was palatable but rather fizzy (probably out of a bottle). A cocktail ("Cobra Fang") came in an enormous glass (at least a pint) shaped like an Easter Island head, and was very good. In October 2009, bob enjoyed the pineapple and sage mojito (£7.50).

As of 2012, there is a downstairs cocktail bar photo. Ewan and Kerry popped in on a weekend early evening during London Cocktail Week and found the bar relatively quiet (probably as it was early). We sat in one of the booths photo, though the staff pointed out that if a larger group came in and needed it that we would be relocated, but aside from that service was pleasant and friendly and the cocktails were excellent quality.