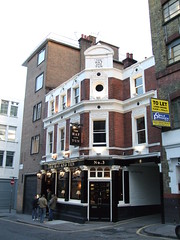 Pub in Clerkenwell, part of the ETM Group.

This is a single room pub with bare floorboards, and the occasional "old world" touch (taxidermied animal heads on the wall, an open fireplace down behind the bar). There is, however, also a bookable function room upstairs, though it's not clear where the entrance to this space is located. There are no obvious screens. Three or four largish tables and around the same number of small ones are spread out across the room.

When Ewan and Kake visited on a Monday afternoon in September 2011, all three handpumps were on, offering Adnam's Bitter (£1.70/half), London Pride, and Doom Bar. There were also draught taps for San Miguel and a few other lagers. A pint of lime and soda was £1.50.