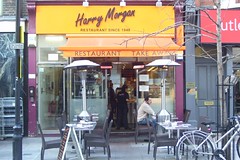 Harry Morgan was a Jewish deli near Oxford Circus, part of a small chain. This branch closed some time in 2009 or thereabouts, though as of spring 2010 they still have other branches in St John's Wood, Harrods, and Brent Cross Shopping Centre. As of April 2010, the Oxford Circus location is occupied by a branch of Tortilla.

This offers a range of sandwiches and some hot food, plus Jewish deli favourites such as chicken soup and salt beef sandwiches.

The salt beef sandwiches and tongue sandwiches (£5.95) are very good, with an enormous pile of warm, juicy meat on rye bread with mustard and pickles. In both cases, the meat is sliced to order from a large piece kept in simmering liquid, keeping it at its best. The chopped liver sandwich (£4.75) was also good (and included tasty pickles), but the price seems somewhat high for what is basically a liver pate sandwich on plain sliced bread.

Apparently, this is part of a chain; the original establishment is in St John's Wood and appears to be the basis of the "since 1948" claim.