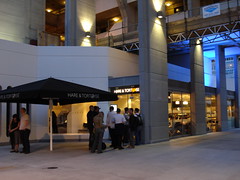 A decent enough pan-Asian (with a focus on Japanese) canteen-style restaurant. This branch is in the Brunswick Centre, near Russell Square Station.

It offers relatively cheap food in pretty large portions, and covers a variety of different types of food (noodles, rice dishes, soup, sushi, et al.). Kake only managed about a third of her main course. (They're happy to pack up leftovers for you, but charge 20p for this.)

Service is sometimes a little slow, with dishes coming out when they're ready (meaning that some people are served long before others on the same table), but is friendly. We had to queue for about 10 minutes to get a table at 1:30pm on a Tuesday afternoon, and again at around 9pm on a Monday evening. When Ewan visited on a Wednesday lunchtime, his eating companions strongly suggested arriving before 12:30pm, and indeed there was a queue outside when we left an hour later.

Kake tried the spicy chicken sticks, which were underwhelming and not very spicy. The curry laksa noodles were very tasty at £5.25. They also now have a sushi menu, with a reasonable choice; the eel nigiri was fine.

Vegetarians are well catered for, with a number of vegetable/tofu dishes available. The tofu is deep-fried, and reasonably tasty. Haven't checked recently about vegan-ness, but I know I ate here when I was vegan --Kake. Ewan had a vegetarian sushi plate for £6.50, which had plenty of different sushi rolls, as well as some nigiri, and it was tasty and filling, certainly superior to many other lunchtime sushi places and at a more favourable price. The tempura vegetables (£4) were okay as a starter, and there was at least plenty of it.

The drinks menu is small but varied, including some interesting soft drinks as well as beer, wine, and sake. The plum wine spritzer (£2.30) is rather nice.

Comment added by claud: I am in love with this place, but it is a very temperamental lover. Having been here at least once a month for the last year or so, I've experienced everything from paper in my fried cod to a divine laksa taking me home to Singapore for a moment. There are sometimes 10m queues outside the restaurant on busy nights, and I've been recently told that reservations for groups smaller than 10 cannot be made (but this was on a Saturday evening - try on weekdays). Don't go with high expectations, though, but you can definitely expect great value.