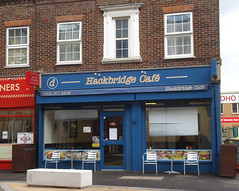 It seats around 35, and there's also a two-seater sofa for people waiting for takeaway sandwiches. The decor is slightly smarter than usual for a cafe of this type. Newspapers sit in a little basket on one wall. The frontage is fully glazed, though the blinds were partway down on our visit. The white-painted walls are adorned with guitars and black and white photo of pop culture icons including Elvis, Marilyn Monroe, and Audrey Hepburn.

They do various set breakfasts including three vegetarian options (one of them with vegetarian sausages). They also do omelettes, sandwiches, jacket potatoes, and lunch items such as lasagne, liver & bacon, chilli & rice, and lamb chops.

Kake first visited on a Saturday lunchtime in January 2015. There were a dozen other customers when I arrived, including the obligatory group of workers in hi vis, and a fair bit of turnover during my visit. No music was playing, but the flatscreen was showing the news with the sound on quietly. Service was friendly and welcoming.

I had the "early starter" set breakfast (£5.30) photo, which included egg, hash browns, beans, bacon, tomato (choice of tinned or fried), choice of bread or toast, and choice of tea or coffee. The ingredient quality was above average for this style of cafe, and it was cooked well too, with no excess grease. There were only two hash browns rather than the three you usually get, but these were slightly bigger than normal, which partially made up for that. My cup of "very weak tea" was made perfectly, with the staff member checking carefully to make sure I was happy with it.

On another visit on a Friday lunchtime in January 2017, Kake's takeaway fried egg sandwich and cup of very weak tea (£2.80 in total) were prepared very quickly and were just right, with the tea exactly the right strength, a nicely runny yolk on the egg, and soft but sturdy brown bread keeping all the yolk inside the sandwich.

Accessibility: A tiny step to get in. Some but not all of the seating is fixed to the floor. No obvious customer toilet.