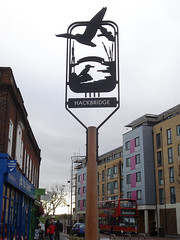 An area of South-West London lying within the London Borough of Sutton. It's primarily residential, with shops and eating places aimed at locals rather than those from further afield. One notable residential development is BedZED, which was designed to create zero carbon emissions.

Hackbridge's primary open space is Beddington Park, through which the River Wandle flows. The area is served by Hackbridge Station, with trains to Sutton, Wimbledon, and central London via Elephant & Castle and Blackfriars.

Auto-generated list of things in Hackbridge (view them on a map):