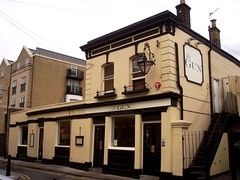 Gastropub on the east side of the Isle of Dogs.

It was previously part of the ETM Group, but according to the Oct/Nov 2016 London Drinker is now owned by Fuller's. We haven't visited since the change of ownership, so some of the information below might be out of date.

The bar is in the middle of the main room. Dining tables are set up with white tablecloths and full table service to the left of the entrance and in a room to the rear, while along the right and on the river terrace are tables for casual drinking. Some of these have knives, forks and napkins but are not formally set up for dining. The (heated) riverside terrace has a view of the Dome/O2 Centre.

Kake and Ewan visited on a Monday afternoon in September 2008. We'd hoped to get some chips or something, but they weren't serving any more food until 6pm, so we had some chilli corn kernels instead, which were OK. The other bar snacks available were pistachio nuts and salted peanuts.

There are three handpumps which in September 2008 had Adnam's Broadside, Abbot Ale and Young's ordinary. Two pints of the last along with the corn kernels came to £8.15.

In addition to the bar food menu, they operate a largely separate al fresco dining area adjacent to the pub, called A Grelha at The Gun, with barbecue food influenced by the Algarve region photo of menu in Aug 2008, as well as drinks to match (Portuguese wines and beers, and jugs of sangria for £18). It's in a fairly large space, but on a sunny weekend afternoon it gets very busy, so booking is advisable. Although the menu doesn't offer any vegetarian options, they are able to accommodate vegetarians upon request, and can make a vegetarian version of the espetada (hanging kebabs, £9.50, though more expensive with meat) photo, and the cataplana (a sort of ratatouille, served in a large copper pot, £15 for one or £28 for two) photo. Ewan had the latter and it was tasty, and very spicy. Garlic in general was liberally used throughout the cooking, especially in some fine new potatoes served as accompaniment to the fish and espetada dishes photo. Whole fish is sold by weight, but they have a particularly strong range of fish dishes. Desserts were also excellent, with some lovely creamy ice cream (£5) photo, and a fine chocolate mousse (£5.50) photo

Boards in the pub advertised live jazz on the weekends and free wireless. Note that the toilets are labelled 'Horatio' and 'Emma'.

Accessibility: There's step-free access to the bar, a decent amount of the seating area, and the toilets, though not the riverside terrace.