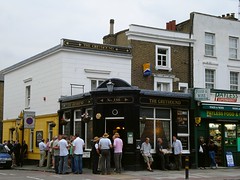 The Greyhound was a smallish pub very near Oval Station. It has now closed and been replaced by the Brown Derby photo.

Smallish pub very near Oval Station, located on the corner of Kennington Park Road and Elias Place. The decor is pretty tatty and it's nothing particularly special, but there's nothing really awful about it either.

Kake, bob, ilmari, and secretlondon visited on a Friday evening in August 2008. Although it was shortly after close of play at the nearby Brit Oval, we had no trouble finding seats inside, as most people were drinking outside (and there were fewer of them than at the Hanover Arms a few doors up, where outside drinkers were spilling all over the road).

Don't know whether they do food.

As of August 2011, there is a lively Irish/bluegrass session on Sunday evenings, which starts at around 9:30pm and usually ends in a lock-in until 3-4am.

Accessibility: one or two steps up to get in (depending on which entrance you use), and toilets are down a flight of stairs.