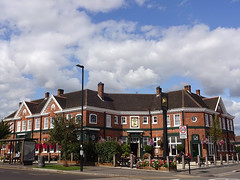 Wetherspoons pub and hotel in Northolt.

It's very large, with at least three separate seating areas, each a good size in itself. The main entrance leads into a space dominated by high tables and stools, with a large square bar serving from two sides in the corner. The floor here is varnished boards, with checkerboard tiling around the bar.

Further into the building is a carpeted space with back-to-back booths in the centre, service from a third side of the abovementioned bar, and a double-height ceiling with windows all along the edge and a enormous art deco light fitting in the centre. This used to be a ballroom, and retains its sprung floor which bounces every time someone walks across it. The stage at one end has also been retained, and is now used to display musical instruments such as a double bass and various brass instruments.

Yet another room around the side from here offers a slightly less elaborate space, and finally there's a large patio out the front with picnic benches.

Kake visited on a Tuesday afternoon in September 2017. There were quite a few people in when I arrived around 2pm, and despite the size of the place it felt quite full and lively. Service was friendly and welcoming. No music was playing, as is usual for Wetherspoons.

Child-friendliness: There were several children in on our visit.

Accessibility: A step to get in at the front entrance, but there's a ramped entrance round the back. No steps to the ladies', which also has a large cubicle with grab bars and door opening out, and a low sink. (There's probably an accessible toilet somewhere, but we didn't see it on our visit.)