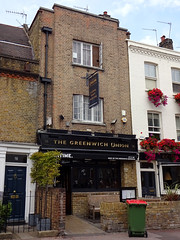 The Greenwich Union was a pub in Greenwich, and the brewery tap for the local Meantime Brewery. It has now closed.

A notice on its website as of August 2020 stated that it had closed down for good. As of April 2021 Murky Depths reports that it has been bought by Young's, who intend to expand their next-door pub the Richard I into it.

A pub in Greenwich, and the brewery tap for the local Meantime Brewery. It's located next door to the Richard I pub.

bob visited on a sunny Sunday afternoon in April 2009. It was quite quiet inside, but the beer garden at the back looked pretty busy. Ewan visited after work on a Friday in June, and tables inside were also fairly scarce, though there were one or two places to sit.

There are two handpulls at the bar, with Adnam's Bitter and Meantime London Pale Ale (£1.60/half) available on Ewan's visit. They also have the full range of Meantime beers on tap (LPA, Helles, Stout, Kölner and Wheat) and a St Louis Kriek, as well as a seasonal beer usually (in June 2009, this was the Maibock, a 6% lager brewed with elderflower, £1.90/half). Aspall's and Sheppy's cider are also on draught. On bob's visit earlier in the year, the IPA was on handpull (£1.90/half), refreshing but quite strong.

They serve food every day, although on Sundays they seem to just do roasts. The food menu looks pretty good, and Ewan chose hummous and bread from the bar snack menu (£3.50), well-made with a citrusy tang to it, which came with some tasty, toasted — though rather overly blackened — bread on the side.

Accessibility: No steps to enter, and the bar and garden are on the same level, but the toilets are downstairs. The stairs aren't designed for tall people, but there's plenty of padding on the bits you're likely to hit.