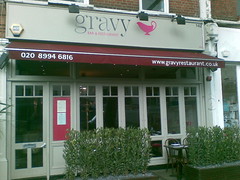 Now closed; used to be a bar and restaurant in Chiswick. As of May 2009 the site is occupied by a Persian restaurant called Chella.

Bar and restaurant on Chiswick High Road. (Note that it's had at least two incarnations, the most recent makeover being in early 2008. Apparently it used to be pretty bad, but things seem to have improved.)

The front is set up like a bar, with four or five tables with armchair-like things, though there's some banquette seating as well (some of it set up for dining). You can come in just for drinks; you don't need to be dining. As of March 2008 they're not doing bar food or cocktails yet, but they plan to.

Bob visited for lunch on a Monday in March 2008. It was empty when I arrived around 12:45pm and still empty when I left an hour later. I had the lunch special of three courses for £17. Soup of the day (normally £4.50) was smoked aubergine and pepper; it was a bit watery though fairly smoky. Main course was fillet of venison wrapped in ham (normally £15.50) photo. The venison was good, and still very rare in the centre. The ham didn't taste of much but added crispyness. The accompanying purple sprouting broccoli was very good, and the fondant potato was fine too. It was all pretty tasty. Finally, the rhubarb crumble (normally £4.50) photo was very good, though the rhubarb flavour was quite delicate and the custard was bizarre - it tasted like Bailey's and I wouldn't have called it custard or even creme anglais (which it resembled more than custard).

Service was friendly and efficient (though the waiter was hardly rushed off his feet). I was offered (complimentary) bread twice.

Bob's verdict: would probably go back; the lunch deal was definitely worth it, and I'd like to try some of the other interesting-looking starters and mains.

They have various special offers available at lunchtime; in March 2008 this was three courses for £17, while in April 2008 it was two main courses for the price of one (except Sundays). Breakfast is served from 10am-5pm; Full English is £6.