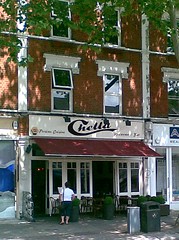 Persian restaurant in Chiswick, on the site where Gravy used to be.

bob visited on a Monday lunchtime in June 2009. I was the second customer, though 15 minutes later another three people turned up. The restaurant can seat 30 to 40.

No service was added to my bill.