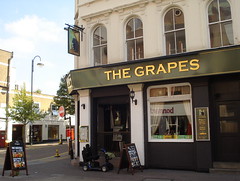 The Grapes was a Wetherspoons pub in Sutton. It has now closed. According to the Oct/Nov 2018 London Drinker, Wetherspoons sold it "after their planning application to build flats on part of the land was refused".