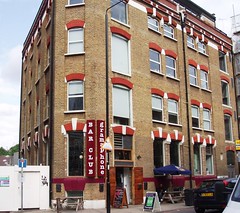 Now closed; was a bar and live music venue in Spitalfields. As of October 2012, the second branch of Lupita, a Mexican restaurant, is due to open on the premises.

The information below is retained for people who want to know what it was like as Gramaphone.

A misspelled bar and live music venue on Commercial Street in Spitalfields, not too far from Aldgate East Station.

Up a few steps from the entrance, and there's a number of tables of a decent size scattered around, with some artworks exhibited on the walls as per Shoreditch guidelines.

It has a few beers, but emphasises more its wine list (there's a drinkable house white) and a small range of cocktails.

There's also an open kitchen to the side of the bar, serving serviceable Thai food. Food is served noon-10pm Monday to Friday, and noon-8pm Sunday, and they advertise free spring rolls with a main course between noon-4pm Sunday to Friday. Although my initial order of a vegetarian green curry had chicken in it, a replacement was quickly offered with tofu, which it tasted perfectly good and was good value at around £6.

Downstairs is a venue putting on live music amongst other things, with its own small bar area, a couch and a couple of comfy chairs (up the back). Large stone pillars block off half the room (where the stage is), so the actual area where one can watch the bands comfortably is much smaller than the notional space of the room. However, the atmosphere is that much cosier.