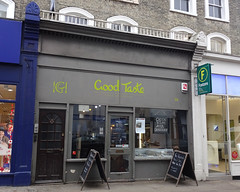 Was a small deli in Crystal Palace, closed down as of December 2017 (as per the notices in the shop window). Their sister restaurant Salt and Pickle just down the road is still operational, and sells a (much smaller) selection of cheese and wine.

They sell wine, beer, cider, cheese, and cured meats, as well as two or three types of bread and crackers to eat your cheese and meat with. See interior photo.

On bob's December 2012 visit there was a relatively interesting range of wines on offer from several different countries, both red and white. The prices weren't obvious without turning the bottles round, but I chose two priced at £13.35 and £14.95 respectively (and got a 10% discount for buying more than one bottle). Most if not all of the wines had tasting notes attached to the front bottle of each type.

The beer range was also interesting — nothing I would consider boring (except the Dark Star, but that's just personal taste). Suggestions for things to eat with each beer were provided.

They also had some ports and dessert wines.

The meat on offer was mostly cured meat, including jamon which they slice to order. The cheese range was substantial, and included items such as stichelton (an English raw milk blue cheese) and a couple of types of brie.

Accessibility: A small step to get in. The beer section and the tills are up a couple of steps.