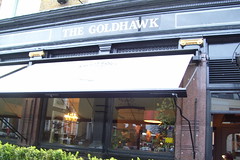 Now closed; was a large pub on Goldhawk Road, a good distance from Shepherd's Bush Green. It closed in November 2012 and is likely to be converted into offices.

It was previously part of the Mitchells & Butlers "unbranded" Castle sub-chain. However, as of October 2010, Almost Witty reports that the Goldhawk is no longer a Mitchells & Butlers pub, but has been acquired by Faucet Inns. The comments below predate this change.

Inside, there are plenty of sofas and coffee tables, as well as unvarnished gastropub-style tables, flanked by upright chairs and banquette seating. A decorative (i.e. seethrough) bead curtain divides the back part from the front, and one wall is covered with vinyl records. Purple and gold fairy lights twinkle behind the bar. The ceiling is high, and has a number of ceiling fans to add to the light and airy feel of the place photo.

Kake and bob visited on a Friday afternoon in May 2009. All three handpulls were on, offering Deuchars IPA, London Pride (£2.75/pint), and Timothy Taylor Landlord (£2.90/pint). They also had Aspalls cider (£3.20/pint) on tap as well as Addlestones cloudy, a few Westons, and Brothers perry (£3.75/500ml) in bottles. (Kake was pleased to learn that they're having a cider festival throughout June 2009.) Other bottled options were Liefmans Kriek and Duvel. LoopZilla has previously noted interesting lagers, including Budvar dark.

When Kake arrived around 4pm, there were only a couple of other people in. By the time we left around 7pm, there was quite a lively atmosphere but still some seats left; this might have been partly because it was a lovely day and most people were packed into the small patio seating section out the front. Music was playing, but not loud enough to drown out conversation. It was quite an eclectic selection, including rock, reggae, rock 'n' roll, rap, ska, and some other stuff that sounded a bit like Thievery Corporation.

As of May 2009, there's a pub quiz from 8pm on Sundays (£2 to enter). They also host live music; as of March 2008 this was on a Tuesday evening with a variety of musicians performing short sets, but as of May 2009 the Goldhawk website suggests it's moved to Thursdays from 8pm.

Food is served noon-10pm Monday-Sunday, and the menu photos is quite interesting; it's the same as in the other pubs in this sub-brand, but this is not a criticism when the menu is well-chosen. In March 2008, LoopZilla's veggie burger was very dull, but on previous visits the fish and chips (£7.25) were excellent, and came with mushy peas.

Accessibility: No steps to get in, and it's step-free throughout except for a very small portion of the seating area. There's also a RADAR-locked accessible toilet.