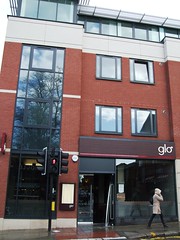 Now closed; was an Asian-international fusion restaurant in West Hampstead. As of mid-2011 the premises are occupied by a Vietnamese restaurant called La Du Du.

In keeping with the confusion of cuisines, the decor of this restaurant doesn't fit into any particular idiom, preferring an international (Ikea-style?) aesthetic which verges on blandness. Long tables reminiscent of those at Wagamama and other buffet-style restaurants, but with a dark-wood veneer, some kind of stitched bamboo wallpaper and the ambience of a style bar.

The menu is likewise odd, presenting a huge variety of options: decision-making is difficult. There are pizzas and pasta dishes, dim sum and sushi, burgers, salads, and all things in between. Ewan settled on a Thai vegetable pizza, which with its lovely thin crust was definitely tasty, despite the oddness of the Thai flavours combined with an Italian base. Jo's mozzarella salad featured slices of the cheese interleaved with tomatoes with fresh basil and a balsamic dressing -- more assuredly on the Italian end of the spectrum.

On a Saturday lunchtime, the place didn't have more than a few diners, and appeared to be staffed by just one person. However, service was friendly, and the wait for food wasn't too long.

A visitor to this site (May 2009) tells us that Glo have dropped the Italian dishes that used to be on the menu, though they still do international dishes such as burgers and fish & chips.