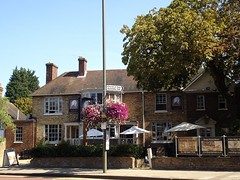 The interior is a somewhat eclectic mix of fun fur upholstery, piles of cut logs, and random stuff such as a large pottery urn marked "huile d'olive VI". There's an area of banquette seating and small half-round armchairs to the right of the bar, leading through into a restaurant area (which was already set with wine glasses and cutlery on our September 2012 visit). Normal chairs and tables are placed throughout the rest of the pub. There's plenty of seating out the front too.

Kake visited on a Tuesday lunchtime in September 2012. Although they have three handpumps, two were unclipped and the only real ale available was Brakspears Oxford Gold (£3.30/pint). Cocktail menus on the tables offered a reasonable selection, including some nonalcoholic.

There were a fair few people in when I arrived around 1:30pm, though still plenty of free tables. Chill-out music was playing, not too loud, but at times verging on the wrong side of cheesy. The staff seemed to consist of twenty-something Antipodeans, which only served to emphasise the chain-pub feel.

Food is served from a menu shared with other pubs in the Premium Country Dining Group. Kake tried the marinated seared tuna steak with an asparagus, pepper, coriander and ginger salad (£13) photo. The plate it was served on didn't look very clean around the edges, which didn't bode well, but the tuna was actually very good; seasoned just right, and nicely seared on the outside but still perfectly rare in the middle. The salad was badly mis-advertised, though; it actually consisted mainly of Chinese leaf and some rather awkward-to-eat carrot slivers. There was a small amount of asparagus and red pepper in it, but really not enough to merit featuring in the name of the dish. Still, it was tasty enough; the vegetables were fresh, and although there didn't seem to be much (if any) dressing, I didn't really miss it.

Kake's verdict: It felt too much like a chain pub (which it is) for me to put any high priority on coming back, though I'd not say no to popping in for a drink and some lunch if I was passing. I was actually quite pleasantly surprised by the quality of the food.

Accessibility: Steps to get in at the main entrance, but there's a ramp to the side door. Once you're in, it's step-free to the bar, toilets (including an accessible one), and most if not all of the seating.