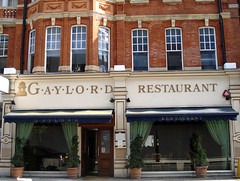 Gaylord was a long-established Indian restaurant near Oxford Street. It closed down in late 2019.

Inside, rows of tables stretch back from the street, with banquette seating along the wall. Tablecloths and napkins are white, cutlery is heavy, and tables are set with wine glasses.

Our first visit (by Kake, Ewan, Her Welshness, and James) was on a Wednesday evening in May 2009. We'd attempted to book a table via their website, but it didn't go through — they explained that they're revamping the website at the moment, and that our lack of booking was no problem. We got a nice table by the window.

Poppadoms and chutneys photo were brought moments after we sat down (these are not optional, and are charged at £1.50/head; this is mentioned on the final page of the menu). They were fine. The lime pickle was very limey but not as hot as it usually is.

We ended up going for individually-plated starters. Her Welshness' portion of onion bhajis turned out to be pretty huge. James and Ewan seemed pleased with their bhel poori. Kake ordered the tomato shorba (soup) partly out of curiosity — I visited Gaylord several years ago before I started going to restaurants quite so regularly, and found the tomato shorba pretty amazing. I was less amazed this time, but it was still pretty good, fresh-tasting and well-flavoured, with black pepper prominent among the spices used; alas, it was missing the advertised "savoury crispies" though.

For mains, Her Welshness chose the murgh gilafi seekh (minced chicken kebabs) photo; these were very good, well-flavoured and studded with chopped peppers and herbs. James had some form of lamb curry. Kake and Ewan shared a couple of vegetarian dishes; baingan Hyderabad se (sliced aubergine with green chillies) and channa Peshwari (chickpeas) were both well-textured and well-flavoured, with both aubergines and chickpeas cooked to a pleasing softness. We were also persuaded to order a dish of dal makhani for the table, since our waiter was concerned that none of our dishes had much sauce; we were glad we did, since it was also tasty, though it did mean we ended up with too much food. Our final bill was £35/head including two bottles of wine between the four of us and an auto-added 15% tip.

Service was traditional but friendly, with waiters in dark suits and a maitre d' who introduced himself at the beginning of the meal. Hot towels were brought when we finished eating.

Kake and friends visited again for lunch in May 2011. We'd booked, mainly in order to let them know there would be a baby in our party; there were plenty of free tables throughout our visit.

We shared a few starters. Golgappa shots (£5), also known as pani puri, were crisp shells filled with chickpeas and potatoes, served with a tangy liquid to be poured in just before popping the entire thing in one's mouth at once. The shells were nicely crisp and the fillings were flavourful, but unfortunately the shells were a little leaky, making them messy to eat (Kake has had golgappa before and can confirm that these were more leaky than average). Palak patta chat (£6) — small, crisp gram flour and spinach fritters doused in yoghurt and tamarind sauce — was pretty good, crispy where it should have been crispy, nicely tangy from the tamarind, and gently cooling from the yoghurt.

Among the mains, murgh gilafi seekh (minced chicken kebabs; £12) was as good as on our previous visit, while dal bukhara (small black lentils in a butter/cream sauce; £8) was rich and savoury. Baingan Hyderabad se (aubergine in an onion gravy; £8) was fine and not too oily, though a small portion for the price. Plain rice (£4) was fine, though monstrously overpriced; we had two portions for a total of £8, and it was really only enough for one hungry person.

Service was fine apart from a continued failure to ensure our water glasses weren't empty for too long (we'd have been happy with a jug left on the table, but they didn't do this). We'd chosen to come here because we expected it to be baby-friendly (like all proper Indian restaurants), and we weren't disappointed; one of the waiters in particular was very taken by the six-month-old in our party. However, the auto-added service charge did seem a bit steep at 15%, especially on top of the non-optional £1.50/head cover charge.

Kake's verdict: The food is perfectly competent, though not good enough to really justify the prices, given what's available elsewhere in London. Having said that, I like it here, though I'd have trouble putting my finger on exactly why; it's probably a combination of knowing its vintage, and having visited a number of times now with no bad experiences.