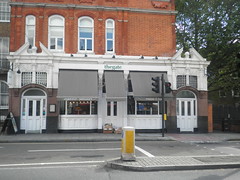 Vegetarian restaurant in Islington, near Sadler's Wells theatre. There's another branch (the original) in Hammersmith. The menu changes seasonally and offers several completely vegan and gluten-free dishes, with others available as a vegan/gluten-free option.

The restaurant feels large and airy, with a high ceiling and large windows along the front of the restaurant. There's a semi-open kitchen (i.e. you could see the chefs from our table, but not what they were doing!) along the back wall. The tables are quite crammed in, though, and it can get very noisy due to all the hard surfaces; on our April 2016 visit it was quite hard to hear each other at times, even though the place was less than half-full.

Kat and Bec visited on a Tuesday evening in June 2014, having booked online. Our starters of courgette flower (£8.50) and halloumi kibi (£6.50) were brought fairly promptly after we'd ordered (though service did get less attentive as the restaurant got busier later on). Kat enjoyed her halloumi skewer but thought the accompanying salsa was lacking a little zing. This was rectified for her main course of teryaki aubergine (£14), which came with some very powerful horseradish and pickled ginger (indeed, she couldn't taste much else after that). Bec enjoyed her confit artichoke salad (£12.50).

Our server recommended the blueberry brioche (£5.50) for dessert, and it was excellent — great texture and flavour. The bitter chocolate tart (£5.50) was fine, but in Kat's opinion the pastry was a bit too thick at the edge (she regretted not choosing the brioche as well).

Kake and friend visited on a Wednesday lunchtime in April 2016, again having booked online. A bread basket (£3) came with enough bread for two, and it was good bread, too, with a complex flavour and a good crumb, studded with some nicely-judged green olives.

Tortillas (£13) photo and root vegetable hash (£8) photo were both beautifully presented. However, the poached eggs on the root vegetable hash were both problematic in different ways; one had a yolk that was solid almost all the way through, and the other was woefully undercooked, with raw whites spilling out at the first small prod. Aside from that, the dish as a whole was OK but nothing special.

Bec's verdict: Everything was bursting with flavour and beautifully plated. The artichoke salad didn't really feel as robust as a main should, but as I also had a starter and pudding, it was fine. I'd definitely go back again.

Kake's verdict: I was a bit disappointed by the food, and the noise issue is a big downside for me. I might give it another chance at some point, though.

Kat's verdict: I'd happily suggest it to both vegetarians and omnivores.

Child-friendliness: They have a children's menu, and there are nappy-changing facilities in the accessible toilet.

Accessibility: No steps to get in (just a small ridge), and there's an accessible toilet and plenty of seating on the same level. The tables are fairly close together by default, though the staff can move these around to create more space (on our April 2016 visit we observed this as a side-effect of there being a party in requiring a larger table). Some of the seating is up steps, and the other toilets are in the basement, down a narrow staircase. The space gets very noisy when there are more than a few people in.