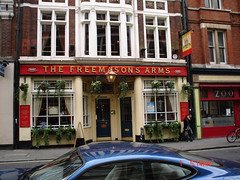 Kake, Bob, and DrHyde (in various combinations) have visited this pub several times; most if not all of our visits were marred by the noise coming from the many flatscreens scattered around the pub. It's not so much the presence of the flatscreens that's the problem; but that on more than one occasion they've been left playing TV channels - including the adverts - at top volume. One does not generally go to the pub expecting to be confronted at every turn by an enormous armpit and a voiceover extolling the virtues of roll-on deodorant.

It can often be very crowded, but at other times it's fairly easy to find a seat. Kake, at least, hasn't yet figured out the exact rhythm of business.

Note that they may close early on a Sunday; they may be open into the evening and they may not — it totally depends on whether they have more than a couple of people in.

Accessibility: Level access to the bar and most of the seating area (though there's a raised area at the back); and there's an accessible toilet accessed via the ladies' — follow the bar all the way along to the back, turn right, and it's on your left after you enter the little passageway.